Founded in the 1840's, Petites, Newfoundland, has been home to generations of weather-hardened souls who made their living on the sea.  By 1859, a methodist church was constructed that later became the Bethany United Church.  There were 212 people living here in 1946, and only 146 by 1956.  In October, 2003, the last remaining residents of the community were resettled.

I had the privilege of visiting the remains of this abandoned town with my father, and spent two days exploring and photographing as much as I could.

The first day, with the sun shining down, I found a rock on a high place and just sat down.  Looking out over it all, I tried to picture life here.  It took little to imagine children walking the paths from the scattered houses to the lone school house near the church.  One could almost hear the generators running in the power plant, or the workings in the mill across the small harbor.  Of course, one could easily imagine the comings and goings of fishing boats harvesting from the sea to earn a living here in the barren landscape.  With a feel for the place, I set out to begin my task.  I did a quick pass of the whole community, but then focused on the south side of the harbor.

When I returned for the second day, the fog was holding on, giving everything a magical look.  I went out to the cemetary, and worked my way around to the north side of the harbor, finishing by the afternoon.

While I have been in ghost-towns before, Petites was somehow unique.  Perhaps because relatively little time has passed since the community was emptied, there was a strong sense of the life that was here.  This was a feeling of being able to connect to those who were born, lived and died here.

My sincere thanks to John and Julia Breckenridge, and Austin Bennett.  Without them, the visit would not be possible.  Even more importantly, without their passion for this community, it's uncertain to me what would remain, or if it all would just slowly slip from memory and return to nature as if it had never been.

I had the opportunity to revisit this community, and see the changes man and weather had wrought in the last four years.  This time I came equipped with my newly purchased drone with the idea of collecting video footage.

While my time there was brief, I was able to put together the following YouTube video for you to enjoy.

Only a few short days after I left Newfoundland, the remnants of Hurricane Fiona struck with devastating effect on the Maritimes.  I've been informed that Petites was not without significant damage.  Perhaps I will have to return to continue to document nature's slow reclamation of this picturesque village. 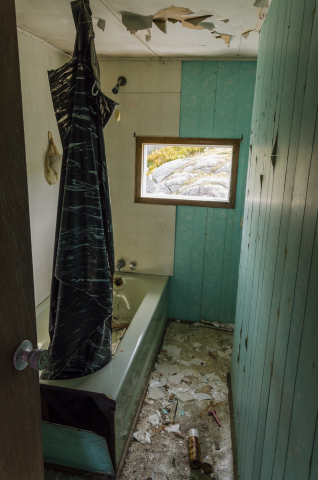